Meet the doctors of NBC’s The Night Shift – Eoin Macken, Jill Flint and Ken Leung.  Thanks to a recent promotion, Flint’s Jordan Alexander is doctor #1, but even though Jordan’s in charge, Macken’s TC Callahan has no intentions on abiding by any hospital rules, especially if it means sacrificing a patient in the process.  Leung’s Topher always puts his patients’ wellbeing above policy and finances too; he’s just a little more deft at manipulating the system so that the San Antonio Memorial senior manager, Michael Ragosa (Freddy Rodriguez), doesn’t bear down on Jordan for breaking too many rules.

Click here to read more and watch the interviews.

Collider Goes to the Set of NBC’s THE NIGHT SHIFT; Meet the Staff of San Antonio Memorial 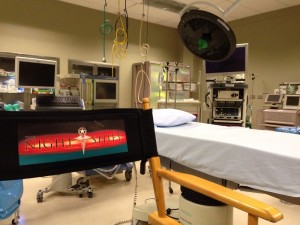 It won’t be easy adding yet another medical show to the mix, but Gabe Sachs and Jeff Judah (Freaks and Geeks, 90210) are giving it a go with their comedy-drama hybrid, The Night Shift.

While on the show’s Albuquerque set, Sachs himself even admitted that it wasn’t easy finding someone to give them a shot.  “We would go in there and pitch and it would be like, ‘That’s so great.  So anyway, so they’re in high school …’”  He continued, “And then we said, ‘Well, we want to do a medical drama that has this intensity, but also adds some humor into it,’ and it was just so foreign.”  Fortunately the concept wasn’t foreign to everyone because come Tuesday, May 27th, The Night Shift begins its run on NBC.  Hit the jump for our full report from visiting the set of this unique new series. 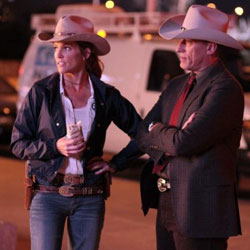 Tricia Helfer is a force to be reckoned with as Molly Parker in ABC’s upcoming series Killer Women, but even a rough and tough Texas Ranger needs a support system.  Even though some officers haven’t warmed up to the idea of having a female Texas Ranger around, Molly’s boss – Alex Fernandez’s Company Commander Luis Zea – is well aware of her ability and the value of her unique intuition that lets her tap into the minds of female killers. When Molly isn’t out making sure justice is served, she’s spending time with her big brother Billy (Michael Trucco), his wife Becca (Marta Milans) and their two daughters on their San Antonio ranch.  Hit the jump for more on Killer Women’s supporting line-up.

Click here to read more and watch the interviews.

As someone with a soft spot for action and tough female leads, the moment Hannah Shakespeare’s agent suggested she take on Killer Women, there was no discussion necessary; Shakespeare was in.  After going off to develop the narrative on her own, Shakespeare came back with a show centering on Molly Parker (Tricia Helfer), a female Texas Ranger. Even though Molly is clearly capable and a major asset as someone with the ability to understand why women kill, she’s still striving to prove herself in the male-dominated profession. 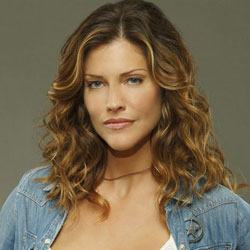 With the help of the real first female Texas Ranger, Marrie Aldridge, Tricia Helfer is bringing her own sassy, ballsy and determined Texas Ranger to TV in ABC’s Killer Women.  Helfer’s Molly Parker recently received her Texas Ranger ranking and gets loads of flack from other male officers in other jurisdictions. However, Molly’s ability to tap into the female psyche and figure out why women kill gives her an edge and particularly when it comes to the first case of the season because the Killer Women pilot opens with a women donning a red dress and ski-high heels walking into a wedding in progress and shooting the wife mid-ceremony.

While on location in Albuquerque, we got the chance to talk to Helfer about Molly’s assets and flaws, the Texas Ranger recruitment process, what makes a good Ranger and more.

Collider Goes to the Set of ABC’s KILLER WOMEN

There have only been two female Texas Rangers in history, but now we’re about add a third – well, on TV.

ABC’s Killer Women stars Tricia Helfer (Battlestar Galactica) as Molly Parker, a feisty, determined Texas Ranger with a knack for figuring out why women kill. In the pilot episode, when a woman is murdered right in the middle of her wedding, Molly’s assigned to catch the culprit. Trouble is, it isn’t just about putting this high-heeled killer behind bars; Molly’s got to pinpoint her motives and those aren’t as cut and dry as the San Antonio Police Department would like to think. Hit the jump for all the details on our trip to the set.

Back in October, Collider got the opportunity to fly out to Killer Women’s Albuquerque set to discuss the show with Helfer as well as creator Hannah Shakespeare and stars Alex Fernandez, Marta Milans and Michael Trucco.

We Get a Sneak Peek at ‘Divergent’ with Neil Burger

Back in May, we had the privilege of visiting the Chicago set of the adaptation of Veronica Roth’s Divergent and just last week, it was off to the film’s Los Angeles edit bay to check out what director Neil Burger has accomplished as he creeps closer to locking in his final cut.

For those in need of the basics, Divergent takes place in a postapocalyptic world where the population is divided into five factions based on a citizen’s core values – Abnegation for selflessness, Dauntless for bravery, Amity for peace, Candor for honesty, and Erudite for intelligence. Shailene Woodley’s Beatrice Prior is born into Abnegation, but come the Choosing Ceremony, she’ll get the opportunity to decide for herself; stick with her family, or trust her gut and leave them behind for a new faction.

Fortunately Beatrice doesn’t have to make this life-changing decision all on her own. Prior to the Choosing Ceremony, all 16-year-olds undergo an aptitude test that reveals an individual’s disposition towards a particular faction. Trouble is, Beatrice’s results are “inconclusive,” and that’s where our preview of the film began.