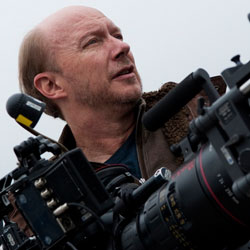 Life is good for Paul Haggis. Not only does he have two Oscars sitting pretty on his shelf, but he’s got three other nominations in the bag and his career continues to flourish. Ever since his shift from TV to film Haggis has almost only delivered critically acclaimed work. First was Million Dollar Baby and then Crash followed by The Last Kiss, Casino Royale, In the Valley of Elah, Quantum of Solace and now The Next Three Days.

The film stars Russell Crowe as John Brennan, an English teacher who’s separated from his beloved wife (Elizabeth Banks) when she’s arrested for murder. Convinced she’s innocent, John devotes himself to getting her out. However, what starts out as a lawful venture turns into a daring plot to defy the system and help her escape.

The Next Three Days isn’t your typical thriller. It does offer a fair amount of action, but it’s really a character driven drama more than anything and that’s exactly what Haggis intended it to be. While promoting the film for its November 19th release, Haggis sat down to tell us all the details from developing his script from the original film, Pour Elle, to locking down locations, working with Crowe and Banks and much more. He even took the time to address the never ending Crash saga. Check out all of that and much more in the interview below.

Review: The Next Three Days

It’s one thing to walk into a drama and get a little action, but when you opt to check out a thriller that winds up being more of a drama, it’s a bit too difficult to adjust. Making it harder to appreciate a drama with a thrilling twist is a lengthy presentation. There’s a lot that works inThe Next Three Days, if only director Paul Haggis had paid more attention to keeping a proper pace, perhaps that drama would have created more suspense and risen to the level of the film’s more exhilarating moments. Instead we’re left with something that isn’t quite dramatic or thrilling and doesn’t strike a chord as much as it could have.

Life is good for the Brennan family, but when Lara (Elizabeth Banks) is dragged out of her house by police officers as her young son looks on, they’re existence becomes anything but ideal. John (Russell Crowe) misses Lara terribly and Luke (Ty Simpkins) refuses to even look at his mother when they go to visit. Lara claims she didn’t commit the crime, but the evidence against her is overwhelming. John soon realizes there is no way to get Lara out of prison – legally.

The central plot of The Next Three Days is beautifully simple; a man’s wife is wrongly accused of a crime and the only way they can be a family again is by breaking her out. The problem is, it takes an awfully long time to get there. The opening sequence is fantastic. We get a very brief, but telling dinner scene during which Lara has a harsh yet amusing argument with her sister-in-law followed by a typical morning in the Brennan household. Unfortunately, breakfast doesn’t last long and a barrage of officers demolishes the serene setting. After Lara’s taken away, that’s about it in terms of action for quite a while.