Tag Archives: My Soul to Take 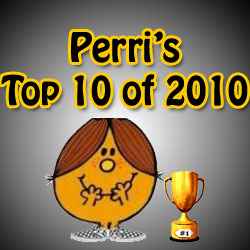 It’s that time of year again; time to look back on the year passed and recognize the best of the best. It seems every year we complain the crop of movies isn’t up to par, but then the time to compile a list of the best of the year arrives and it’s increasingly difficult. This year gave me a particularly tough time thanks to my latest endeavor: film school.

Over the summer, I decided to take my passion for film one step further and enroll in Columbia University’s Film MFA program. It didn’t take long for the education to collide with my work. As I learned more about the filmmaking process, my perception in the theater started to change quite drastically. Misused techniques began to bother me, poor camerawork became as distracting as ever and too much exposition in the dialogue made my blood boil.

Last year I strove to keep my list as entertainment-based as possible. My top ten films of the year consisted mainly of selections that I’d watch over and over again without hesitation. Well, this year is different – slightly. While I’ve tried to keep my focus on films that simply made going to the theater a downright joy, what made this activity enjoyable for me changed a bit. With that being said, here are my top ten films of 2010, the purely fun, the poignant and simply well made.

Tagged as Black Swan, Buried, Easy A, Exit Through the Gift Shop, Grown Ups, How to Train Your Dragon, Howl, In My Sleep, Inception, My Soul to Take, Paranormal Activity 2, Racing Dreams, Scott Pilgrim vs. the World, The American, The Crazies, The Disappearance of Alice Creed, The Fighter, The Kids Are All Right, The King's Speech, Top 10, Top 10 Movies, Toy Story 3

Review: My Soul To Take

Nobody’s perfect, but that doesn’t make it any easier to see a subpar movie from a filmmaker you revere. Even though Pulse and Cursed are clearly weak films, both are still entertaining to a point. Sadly, the only way to get any entertainment out of Wes Craven’s latest film, My Soul to Take, is to see it in a packed theater, that way you can enjoy commiserating with the rest of the audience when you’re hysterically laughing at moments that were never intended to be the least bit funny.

Just before losing his life, the infamous Riverton Ripper vowed to return. Now, sixteen years later, the seven local teens who were born the night the Ripper died begin to lose their lives, one-by-one. The Ripper’s body was never found, so many assume that he’s returned to take care of business. There are also others who believe the Ripper is long gone, but his soul is within one of the Riverton Seven.

Is it the innocent Bug (Max Thieriot)? How about one of Bug’s friends Alex, Jerome or Jake (John Marago, Denzel Whitaker and Jeremy Chu)? Or what about the spiritual Penelope (Zena Grey), the school bully Brandon (Nick Lashaway) or Bug’s crush Brittany (Paulina Cunningham)? Nobody knows for sure, but Bug is clearly the most likely suspect. Not only does he suffer from migraines and terrible nightmares, but Bug has a violent past having barely survived the night his father went on a bloody rampage. 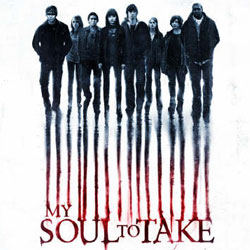 At just nine-years-old, seeing Scream in theaters back in 1996 was bound to be a profound experience. Of course, the film and the opening sequence in particular, terrified me for quite a while, but rather than scare me away from horror films it drew me in to the genre and especially to the work of Wes Craven. Craven has done just about everything from writing, directing and producing films, to just directing, to just producing to remaking his own work. He even edited some of his movies. He’s an undoubtedly versatile filmmaker and that’s as evident as ever in his latest production, My Soul to Take for which he acted as a triple threat yet again, writing, directing and producing.

On top of assuming multiple positions, Craven puts to use numerous themes in the story. My Soul to Take isn’t just a slasher movie; it’s a psychological thriller as well. It focuses on a character named Bug, a kid who is one of the Riverton Seven. Sixteen years ago the serial killer known as the Riverton Ripper was killed and on that same night, seven children were born, one of which was Bug. Sixteen years later the Ripper himself is assumed to be long gone, but legend has it, his soul exists in one of the seven.

Not only does the combination of the serial killer and the supernatural bring the film a unique texture, but so does the fact that this is Craven’s very first 3D production. Even for a veteran like Craven, there are always new challenges to overcome from developing a multilayered story to casting setbacks to adopting new technology. We were fortunate enough to have some one-on-one time with the man himself during which he provided details on the entire process. Sadly, the fact that Craven is a very seasoned filmmaker also means he knows how to divert spilling Scream 4 secrets, so the chat was strictly My Soul to Take, but nevertheless, made for a great conversation. Enjoy the video interview below.

Interview: My Soul to Take’s Max Thieriot And Emily Meade

We generally know how it works with horror movies nowadays; studios snatch up lesser-known actors and look forward to reaping the benefits. Whether or not that actor makes it past that movie and moves onto having a stable career is beside the point. However, that’s not nearly the case with My Soul to Take’s Max Thieriot and Emily Meade. Not only have both appeared in a number of films, Thieriot starred in his first feature when he was just 16 and Meade recently appeared in Joel Schumacher’s Twelve. But these two aren’t just in any old horror flick; they’re in a Wes Craven movie.

Thieriot stars as Bug, one of seven kids born on the night the infamous Riverton Ripper died. Rumor has it that the Ripper died, but his soul was passed on to one of the seven. Which one? Nobody knows. Meade comes in as Fang, the toughest high school bully of them all. She’s got an upper hand on just about everyone and takes pride in ordering her minions to administer necessary retribution in the form of physical beat downs. Her favorite victim is Bug. However, that relationship is going to have to change because when the Ripper returns and starts claiming the lives of the Riverton seven one-by-one, they’re forced to rely on each other to survive.

Both Thieriot and Meade participated in a roundtable interview and spilled their guts not only on working on My Soul to Take with Craven, but on their experience with the horror genre dating way back to when they were young and on Thieriot’s upcoming film House at the End of the Street. Check that out and more below and be sure to keep an eye out for our exclusive interview with Craven later this week.

Tagged as Emily Meade, House at the End of the Street, Joel Schumacher, Max Thieriot, My Soul to Take, Twelve, Wes Craven