Before jumping into our interview with Shane West of “Nikita,” if you’re not fully caught up on the show, you’ve either got to heed this SPOILER ALERT or just embrace the influx of current story and character insight.

West is Michael, the object of Nikita’s (Maggie Q) affection. His feelings for her as well as his strong feelings against Percy (Xander Berkeley) compelled him to ditch Percy’s corrupt organization and adopt Nikita’s goal of putting an end to Division. The status of that goal? Complete. So now what? Run Division themselves, that’s what.

While promoting the show at San Diego Comic Con, West sat down to address season three’s trajectory, the flood of new villains, heading back to Division and more. Hear it all straight from West himself in the video below.

Any new season brings a big shift for a show’s lead, but in the case of “Nikita,” the show’s third season takes Maggie Q’s character in an entirely new direction. Not caught up on both seasons of “Nikita?” It might be a good idea to mind this SPOILER ALERT as this interview is oozing with season one and two plot details as well as hints at what’s to come during round three.

For all of seasons one and two Nikita has had one goal and one goal only – take down Percy (Xander Berkeley) and bring down Division with him. Well, as of the finale of season two, mission accomplished, so Nikita’s going to have to switch gears completely.

What’s the outlook on life back at Division for Nikita? Who’s her next target? How has the experience changed for Q herself? Hear all about that and much more in the video interview below.

Looking for the scoop on what’s to come on Nikita? Who better to talk to than one of the show’s writer-producers, Albert Kim?

When we last left our heroine at the end of season one, Nikita sadly parted ways with her partner, Alex (Lyndsy Fonseca), but teamed up with her flame, Michael (Shane West). Even with Percy (Xander Berkeley) semi out of the picture, the secret government-funded organization, Division, is still very much up and running courtesy of its new leading lady, Amanda (Melinda Clarke). As we’ve seen thus far, Nikita and Michael are still out to topple the corrupt agency, but must do so in hiding and are perpetually on the run.

Even as a show that maintains an impressively solid through line, Nikita also boasts a relentless ability to offer up new twists and turns and, naturally, that’s what this roundtable conversation with Kim focused on over at New York Comic Con. Not only did Kim reveal quite a bit about the show writers’ process, like the practice of having the writers produce their own episodes, but he also dropped a ton of hints as to where season two is heading, including some sort of reunion between Alex and Nikita, Nikita and Michael drifting apart, the return of supporting characters like Owen (Devon Sawa) and Ryan (Noah Bean), and much more.

Clearly Maggie Q is fantastic on The CW’s Nikita, but did you know that she’s the first Asian woman to lead a television drama? I certainly didn’t and, funny thing, neither did Q until an issue of The Hollywood Reporter landed on her doorstep while she was in negotiations for the role and read an article that highlighted the first time feat.

WARNING: Season One Spoilers Ahead

About a year and a half later, Q is firmly entrenched in the role of Nikita, a former agent of the top-secret organization, Division, now striving to topple the corrupt government-funded agency. However, unlike in season one, now it’s Michael (Shane West), not Alex (Lyndsy Fonseca) by her side. After demolishing Percy’s (Xander Berkeley) regime, Michael and Nikita take refuge at Birkhoff’s (Aaron Stanford) very humble abode where they work to take down Division once and for all.

Four episodes into Nikita’s sophomore season, Q hit New York Comic Con to give the fans a taste of what’s to come. After the panel, it was time for a roundtable interview where Q gushed about her passion for the show, admitted she’s picky when it comes to stunt coordinators, addressed the honor of being the first Asian woman to lead a television drama and more. Check it out in this video interview. 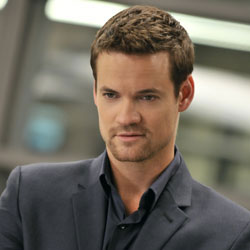 Shane West is no stranger to TV. He starred as Eli Sammler in Once and Againwhen he was just 20-years-old and then as Dr. Ray Barnett on ER for a number of years. But in the case of Nikita, not only had he matured to the point that he’s communicating with the show’s writers, but he also had the privilege of developing a family dynamic with the cast and crew from day one.

WARNING: Season One Spoilers Ahead

West boarded Nikita right from the start as Michael, one of the higher-ups at Division and the man in charge of the new recruits at the secret government-funded agency, one of which is Alex (Lyndsy Fonseca). Little does Michael know, Alex is actually in Division on behalf of rogue agent Nikita (Maggie Q) who will stop at nothing to take down the corrupt organization. Twenty-two episodes later, Alex loses her trust in her mentor and switches sides, while Michael realizes he needs to do so as well, teaming up with Nikita.

In honor of Nikita’s sophomore season, West hit New York Comic Con to talk all about his experience working on the series thus far as well as his excitement for upcoming episodes, including meeting Cassandra (Helena Mattsson) in the flesh. Check it all out in the video below.

Welcome back to The Hunger Games Countdown, Tributes! Yes, the poll has finally wrapped and after the initial race and the run-off, us Hunger Games fans aren’t the Mockingjays, rather the Tributes. Sure, Mockingjays would have been appropriate, but what first enraptures a reader is Katniss’ journey to the Capitol to become a tribute in the Hunger Games. Plus, it’s her experience as a tribute that leads to the term “Mockingjay” having such a strong significance. Non-Hunger Games readers would ultimately have to wait until the third and/or fourth films to truly understand the value of the Mockingjay whereas everyone will get a taste of what a tribute is capable of soon enough.

Now, as a Hunger Games fanatic, my love for the series often seeps into my coverage of other films, particularly ones involving Hunger Games cast members, or, in this case, ones that missed out. While chatting Terri with John C. Reilly at a roundtable interview, I asked what happened, as he was a perfect choice for the role of Haymitch. I know rumors are frequent in the industry, but was surprised when he explained, “That was a total fake story is what happened!” He added, “All of a sudden I had to field these questions about a job I wasn’t doing, didn’t get. It was like, ‘Wow, I get the worst of both worlds. I’m not in the movie and I have to answer why I’m not in it.’”

At least Nikita star Lyndsy Fonseca had a better experience just missing out on the role of Katniss. Even though the part went to Jennifer Lawrence, while talking about her recent release, The Ward, Fonseca recalled, “I literally had the most incredible experience auditioning for that because I got to go to the director’s house and Gary was just the nicest.” She continued, “I just felt very honored that I got as far as I did.” But why should her journey end there? Is it just me, or would she make for the perfect Johanna Mason in Catching Fire?

Lyndsy Fonseca has been around for quite a while, but over the past few years, her career isn’t just on the rise, but on a rocket. In 2010 we saw her in Hot Tub Time Machine, the a few months later as Katie in Kick-Ass and now she’s about to get to work on the sophomore season of the CW show Nikita. She’s certainly been busy, but nestled in there was yet another feature film, John Carpenter’s The Ward.

After wrapping Hot Tub Time Machine, Fonseca stepped into the North Bend Psychiatric Hospital as Iris, a rather intelligent and welcoming resident eagerly awaiting what she hopes to be her final evaluation. However, when a young woman named Kristen (Amber Heard) is thrown into the ward, strange things start to happen and the girls realize it’s not their freedom they need to be fighting for, but their lives.

Not only is The Ward Fonseca’s very first horror film, but it’s her first horror film with renowned director John Carpenter. Perhaps it was intimidating at one point, but now, Fonseca has only the best to say about Carpenter, attributing quite a bit of this fantastic experience to him. With The Ward’s July 8th release fast approaching, Fonseca took the time to chat about working on the film, her upcoming projects, the status of Kick-Ass 2 and even a little about The Hunger Games.

(And yes Nikita fans, I am now kicking myself for starting to watch the show after conducting this interview rather than before. Oh well; until San Diego Comic Con! For now, check out my interview with Fonseca on The Ward.)