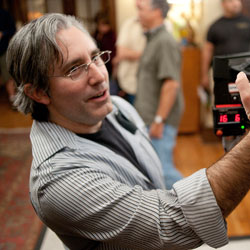 Director Paul Weitz has a ton of pressure on him with his latest film, Little Fockers. Not only does he have to manage a massive top-notch cast, but he’s also the guy who has to take the reins from Jay Roach, the man who helmed the first two films that grossed over $330 million and $516.6 million worldwide, apiece. But Weitz is the guy responsible for critically acclaimed films like About a Boy and In Good Company and he certainly has experience managing an ensemble cast and dealing with some pretty raunchy material thanks to his very first feature, American Pie. Little Fockers was right up his alley.

This time around the action takes place in Greg and Pam’s (Ben Stiller and Teri Polo) hometown, Chicago. They’re about to throw a big birthday party for their twins and the whole family is coming for the occasion. Well, everyone except Greg’s dad, Bernie (Dustin Hoffman), because he’s busy studying the Flamenco in Barcelona. As much as the kids want their grandfather to be there, one less person might not be a bad thing because Greg is already trying to deal with the usual pressure from Pam’s father, Jack (Robert De Niro), her ex, Kevin (Owen Wilson), trying to get the kids into the esteemed Early Human School and attempting to promote the erectile dysfunction medication for the beautiful drug rep Andi Garcia (Jessica Alba) without Pam questioning his motives.

There’s a lot going on in this film and there was a lot going on on the set as well. While Weitz was thrilled to be working with John Hamburg on the script, a significant amount of material came naturally, through improvisation. Unfortunately, with so much on-set inventing came many more cuts in the editing room. Check out what Weitz had to say about guiding his cast while still giving them their freedom, what didn’t make it into the film, but will be on the DVD and much more.

On the Red Carpet with Jay Roach and His Schmucks

Let’s say you were invited to a dinner, but not just any dinner. This is a dinner for idiots and at the conclusion of the meal, you’d have to stand up in front of the entire party and give a presentation to prove the superiority of your idiocy. What would you do?

Stephanie Szostak would resort to her ability to magically raise the corner of her lip with an invisible string. Lucy Punch would take it up a notch and do a little something that would involve her whole body. “I might demonstrate how extremely flexible I am and do some weird contortionist body shapes,” she revealed. “Eating with my feet, through my arms, over my head.” Larry Wilmore would take his show in a completely different direction, “I am going to anti-schmuck it. That’s how I become the schmuckiest cleverest schmuck. They think I’m going to do something schmucky, but then I fool them and I don’t do anything.”

It’s a good thing none of them play a schmuck in Dinner for Schmucks because none of that could compare to a woman who has a conversation with a lobster, a blind swordsman, a ventriloquist with a flirty puppet or a guy who spends his time with a live vulture.

When studios are delivering buddy comedy after buddy comedy, each one better bring a little something new to the table on top of pouring on the humor. Dinner for Schmucks serves up big time when it comes to novelty; it’s the humor that’s on the sour side.

Tim Conrad (Paul Rudd) is doing pretty well for himself. He drives a Porsche and lives in a gorgeous apartment with his loving girlfriend, but being a sixth floor analyst for Fender Financial just isn’t good enough. He wants to be on the seventh floor with the big boys. Tim actually gets his chance after a gutsy play for a vacant spot, but before the seventh floor office can officially be his, he must participate in a company tradition, a dinner for idiots. Each analyst must bring a guest and at the end of the night, the one whose lunacy is the most entertaining, wins.

That’s where Barry Speck (Steve Carell) comes in. Just when Tim’s conscience is about to compel him to ditch the dinner thing completely, Tim literally runs into Barry. It doesn’t take long for Tim to determine Barry, an IRS employee and mouse taxidermist, is certifiably insane and the perfect candidate for dinner. The problem is, Barry’s also a leech and attaches himself to Tim for the days leading up to the dinner. During that time Barry manages to chase away Tim’s girlfriend, trash his apartment, invite his crazy ex back into his life and have Tim audited.