You know who Adrian Martinez is, right? Well, maybe you say you don’t, but odds are, you do. The guy may not be a headliner (yet), but it’s highly likely that you can recall his memorable performances in movies and TV shows like “Sex and the City,” “It’s Kind of a Funny Story,” “Extremely Loud & Incredibly Close,” “A Gifted Man,” “Casa de mi Padre” and loads more.

Martinez’s most recent credit comes from Ben Stiller’s “The Secret Life of Walter Mitty” in which he plays Walter Mitty’s #2, the guy just under the negative assets manager at Life magazine. When Walter heads out on his first ever adventure to track down Sean O’Connell’s coveted negative #25, it’s up to Martinez’s Hernando to support the mission from home base while the establishment is dismantled around him. 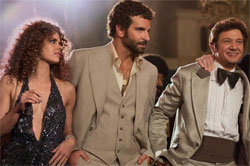 When you make a movie with David O. Russell, you’re going to dig deep, get collaborative, change things on the spot and possibly come out with an acting Academy Award nomination. Christian Bale, Melissa Leo and Amy Adams were all honored for their work in The Fighter followed by Jennifer Lawrence, Bradley Cooper, Robert De Niro and Jacki Weaver for Silver Linings Playbook, and now Adams, Cooper and Jeremy Renner are about to give awards season a go with their performances in Russell’s latest, American Hustle.

Adams steps in as Sydney Prosser, one half of Irving Rosenfeld’s (Christian Bale) brilliant con operation. When Cooper’s FBI agent, Richie DiMaso, catches the two in the act, rather than lock them away, Richie puts the duo to work, using their knowhow to create a con of his own. Richie is determined to entrap the mayor of Camden, Renner’s Carmine Polito, by tempting him with a foreign investment that he could use to rebuild Atlantic City.

After David O. Russell’s The Fighter and Silver Linings Playbook earned a total of 15 Academy Award nominations, including a Best Actor in a Supporting Role win for Christian Bale, the question is, can they do it again with American Hustle?

In the fictional tale inspired by the FBI sting operation, Abscam, Bale leads as Irving Rosenfeld, a corpulent con man rocking a wicked comb-over who runs a highly successful operation alongside his mistress who enjoys posing as Lady Edith (Amy Adams). When the duo is caught in the act by an especially determined FBI agent, Bradley Cooper’s Richie DiMaso, they’re forced to join Richie’s operation and help him bring in a group of high-profile white-collar targets.

Writer-director David O. Russell excels, but his stars steal the show. Bradley Cooper makes for a charming and enigmatic lead, but Jennifer Lawrence steals his spotlight. While everyone involved in “Silver Linings Playbook” pushes the bar higher and higher, it’s Lawrence who’ll be the toughest to top.

After eight months in a psychiatric facility, Pat (Bradley Cooper) heads home to live with his mother and father (Jacki Weaver and Robert De Niro). Determined to get his wife back, Pat dedicates every waking hour to the pursuit, much to the chagrin of his father who desperately wants Pat to watch the Philadelphia Eagles games with him. Despite Pat’s persistence, a restraining order keeps him from making much progress. It isn’t until he meets the equally unsound Tiffany (Jennifer Lawrence) that he finds a way around the court-mandated red tape – as long as he helps Tiffany out with her dance competition first.

“Silver Linings Playbook” is a romantic comedy with a profound amount of drama and depth, a slice of life yet an immensely satisfying story with a beginning, middle and end, it’s off-putting at times, but still the ultimate crowd pleaser. The film is like nothing you’ve seen before, fulfilling certain expectations and defying others, only to turn around and offer something you never saw coming.