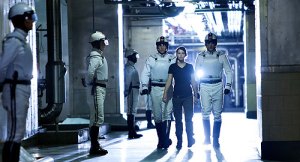 We’re about to see kids killing kids and the world loves it. There’s certainly a lot more to The Hunger Games than violence, namely honest relationships and exploring the effects of excessive government control, but hey — it’s a movie about 24 teens fighting for their lives in a televised battle to the death. So let’s have some fun with the idea of seeing a group of kids arming up in hopes of taking each other out by looking back at some of the most ruthless little ones cinema has to offer.

I wouldn’t say violent children ever really went away, but Kick-Ass’ Hit Girl certainly made them cool again. This pint-sized superhero is as vicious as they come, showing no mercy, slicing off a guy’s leg, reloading her guns on the fly to take out a room full of Frank D’Amico’s henchmen and, my personal favorite, forcing someone to somewhat self-inflict a gunshot to the head via a knife rope.

To top it all off, Hit Girl makes her kills that much more memorable, dishing out obscene dialogue, like telling Kick-Ass that in order to get in touch with her “You just contact the mayor’s office. He has a special signal he shines in the sky; it’s in the shape of a giant c*ck … ” and many other lines not at all appropriate to reprint.

Talk about starting out on the right foot. Not only did first time feature writer-director Michael R. Roskam deliver a solid film, but he snagged an Academy Award nomination for Best Foreign Language Film. Will it claim the Oscar? I’m betting against it, but Bullhead is still undoubtedly a worthy watch.

As kids, Jacky Vanmarsenille (Robin Valvekens) and his buddy Diederik Maes (Baudoin Wolwertz) get into a scuffle with a local bully, Bruno Schepers (David Murgia). Diederik gets away, but Jacky falls subject to Bruno’s wrath, a beating that changes him forever.

Twenty years later, Jacky is working for his family’s meat manufacturing business, a cattle farm with growth hormones at its core. When the Vanmarsenille’s supplier suggests they go into business with Marc Decuyper (Sam Louwyck), a local mafia bigwig, things get quite complicated, as not only is Decuyper responsible for killing a cop investigating his deals, but Decuyper also employs Jacky’s old friend Diederik.