There’s no beginning this review without acknowledging that I’m a diehard franchise fan. While I was thrilled to death over the announcement of Scream 4, of course the excitement came with a twinge of nervous skepticism. What if Scream 4 tarnished the original trilogy? Well, I’ve got good news; Scream 4 doesn’t do that in the least. While the film does boast quite a few throwbacks ranging from character traits, to comparable visuals to direct references to the original story, Scream 4 isn’t exactly a reboot; it’s more of a reimagining and if you don’t mind the change in tone, it’s quite enjoyable.

Original trilogy heroine Sidney Prescott (Never Campbell) is back in Woodsboro promoting her new book, “Out of Darkness.” Old friends Gale Weathers and Dewey Riley (Courteney Cox and David Arquette) welcome her with semi-open arms, the high school Cinema Club treats her like a town icon and others steer clear knowing everyone in Sidney’s life ultimately meets a gory demise. Sure enough, the folks running scared have the right idea because even after being Ghostface-free for a decade, the bowie knife touting serial killer douses Sid’s world in blood and carnage yet again.

Per usual, everyone’s at risk, Sidney’s publicist (Alison Brie), Sheriff Riley’s deputies (Anthony Anderson, Adam Brody and Marley Shelton) and, of course, Sid’s younger cousin, Jill (Emma Roberts). Just like Sidney back in the day, Jill comes with a band of buddies including her snarky, but devoted best friend, Kirby (Hayden Panettiere), creepy ex-boyfriend, Trevor (Nico Tortorella) and film geeks Charlie and Robbie (Rory Culkin and Erik Knudsen); or better yet Tatum, Billy and Randy divided by two. The younger generation is up on the “new rules” and the Ghostface bloodbath vets boast a degree of know-how thanks to past massacres, but each and every one of them is as vulnerable as the next and, in true franchise fashion, “everybody’s a suspect.” 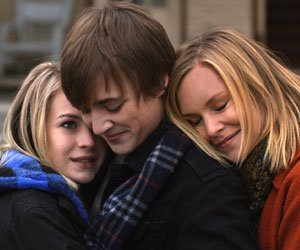 Odds are, you know Kyle Gallner for one of the many high profile horror films he’s appeared in over the past few years. There was The Hunting in Connecticut, Jennifer’s Body and the highly anticipated reboot, Nightmare on Elm Street, but his success in the genre and the prominence of these films doesn’t mean these are the only types of films Gallner has to offer. In fact, he’s got quite a number of non-horror films on the way, one of which hits theaters this weekend, Cherry.

Cherry stars Gallner as Aaron, a somewhat sheltered guy starting his first year at a prestigious college. He may not be as socially and romantically developed as his roommate, but when it comes to academics, Aaron’s above and beyond his peers. He’s enrolled in an advanced engineering program and while the work should be his top priority, Aaron’s distracted by a woman, a much older woman. Aaron meets Linda in class and the attraction is instant. Problem is, Linda (Laura Allen) has a 14-year-old daughter, Beth (Brittany Robertson), and when Linda brings Aaron over for dinner one night, the attraction between him and Beth is instant as well.

Not only was I thankful to have the opportunity to chat about such a purely enjoyable film, but to an actor on the rise that’s certainly worth keeping an eye on. Check out everything Gallner told me about working on Cherry, working with Kevin Smith on his upcoming film Red State and his hopes for the future in the interview below, and be sure to catch Cherry at the Village East Cinema in New York City.

When you’re doused in big budget, effect-heavy features week after week, it winds up being the simplest productions that really blow you away. Writer-director Jeffrey Fine’s newest film, Cherry, is just about as minimalistic as they come, but the results are huge. Cherry achieves a degree of empathy, entertainment and pleasure that most grander scale films never even come close to earning.

Aaron (Kyle Gallner) always plays by his parents’ rules. From the day he was born, they bred him to become an Ivy League student and the time has finally come for Aaron to pack his things, move into his dorm and begin his freshman year at a prestigious school. He’s there specifically for a top tier engineering program, but is also a talented artist, a skill his parent don’t condone pursuing. He opts to take a drawing class as an elective anyway and that’s where he meets Linda (Laura Allen), a much older student who takes a liking to him. A coffee date leads to a dinner date and that’s when Aaron is sure it’s finally going to be his lucky night. The problem is, not only does he discover Linda has a 14-year-old daughter, Beth (Brittany Robertson), but a cop boyfriend, too.

All hope isn’t lost. Sexual tension still exists between Aaron and Linda, but now there’s some between Aaron and Beth as well. Well, most of that tension comes straight from Beth who’s far beyond her years and has no problem telling everyone exactly what she thinks. Even while being pulled in both directions, Aaron nestles into the family quite nicely, so much so his peers take notice of his absence, he isn’t performing well in class and worst of all, his mother demands to know what’s going on.