Here are the Best and Worst Movie Promos of the Week

In preparation for the box office spike that’s sure to accompany the holiday weekend, we’ve got a ton of new trailers for a number of big upcoming films to note (click on the links to watch).

Total Recall unleashed a new one, honing in on some plot details and highlighting Colin Farrell’s relationships in the movie. Also in the action department is the very first trailer for the book-to-film adaptation, Alex Cross. While Tyler Perry does make an impression playing a character who doesn’t require him to don a fat suit, it’s Matthew Fox that steals the show as the disturbingly sadistic villain. Need even more brutality and carnage in your life? Check out some wicked action in the red-band trailer for RZA’s directorial debut, The Man with the Iron Fists. Veering towards the tamer and more dramatic side is the Richard Geer-starrer Arbitrage, which hints at a notably powerful lead performance.

While animated movies are generally kid-friendly, this is Tim Burton we’re talking about and the new Frankenweenie trailer shows off some pretty disconcerting looking characters. As a big baby when it comes to anything remotely sad happening to animals, Frankenweenielooks as though it’ll have no trouble making this 25-year-old cry. In the silly teen comedy section we’ve got the first trailer for Fun Size, a movie that looks to straddle the line between purely juvenile and a piece that might have something to offer to adults. Speaking of childish adults, Kevin James is back in Here Comes the Boom. Based on the new trailer, the film will boast James’ typical absurdities, but also quite a bit of heart à la cheesy sports/troubled school movies.

Tagged as Best/Worst Movie Promos of the Week, Epic, Looper, Robot & Frank, Savages, Sleepwalk With Me, The Campaign

According to IMDb, Martin Sheen has 230 acting titles to his name. That’s over 50 years of work! However, even with an immense amount of experience under his belt, Sheen is still in awe of the ever-changing industry and very excited about having the license to recreate a property with The Amazing Spider-Man.

When Peter Parker’s (Andrew Garfield) parents disappear, he’s left in the care of his Aunt May (Sally Field) and Uncle Ben (Sheen). Uncle Ben assumes a fatherly role in Peter’s life, talking about girls and attempting to help him through rough spots. But, when Peter’s problems go from average teenage woes to the effects of a radioactive spider bite, Uncle Ben has a tougher time breaking through.

With The Amazing Spider-Man gearing up for its July 3rd release, Sheen sat down to talk all about working with the material, breathing new life into the story, the glorious craft service selection and, for those of you who don’t know a lick of information about Spider-Man, a little something in spoiler territory.

Nowadays, quirky films can be considered just as tiresome as the found footage genre. We see it so often that the bar is constantly being raised higher and higher, making it more difficult for filmmakers to offer up amusing silly situations and make them feel authentic. However, when you take on such an endeavor and are so steadfast to nailing every detail of the process of bringing a very specific vision to life, like writer-director Sarah Polley, you’re bound to end up with at least some degree of success.

While on a business trip re-writing the brochure for a historical reenactment facility, Margot (Michelle Williams) meets Daniel (Luke Kirby). Oddly enough, Margot then winds up sitting next to Daniel on their flight home. An even bigger coincidence, they share a cab home from the airport and discover they live right down the street from each other. A match made in heaven, right? Perhaps if Margot wasn’t married.

Margot returns home to her husband of five years, Lou (Seth Rogen). When Lou isn’t working on his chicken-making cookbook, he’s endlessly affectionate with Margot. But still, Margot can’t quite shake Daniel and the fact that she can see him from her window on a daily basis doesn’t help.

Not going to lie. I kind of want my own talking teddy bear. But only if he guzzles beer, tells excessively dirty jokes, can drive and wants to be my best friend forever.

As a young kid, John Bennett didn’t have any friends. The kid who got picked on by the local bullies didn’t even want to hang out with him. However, that’s when Ted, came into his life. The adorable stuffed bear was a Christmas present from his parents and while John loved the inanimate plush toy to death, he wanted something more – John wanted Ted to be real and, it turns out, all he needed to do to make that happen was make a wish.

Now in his 30s, John (Mark Wahlberg) is all grown up, but his trash-talking teddy bear (voiced by Seth MacFarlane) is still right by his side. Playfully telling secrets under the covers turns into ogling ladies and indulging in an abundance of pot, and John’s girlfriend, Lori (Mila Kunis), has just about had enough. The breaking point? Ted’s hooker party and a certain something left on the floor. Lori gives Ted the boot, forcing him to make it on his own and John to grow up once and for all.

Emma Stone has certainly been in her fair share of films at this point, but The Amazing Spider-Man is definitely new territory. She stars as Gwen Stacy, the daughter of the police captain (Denis Leary) and the object of Peter Parker’s (Andrew Garfield) affection. But little does Gwen know, Peter’s got baggage – gigantic lizard man-like baggage.

While The Amazing Spider-Man isn’t much like Superbad, The Help or even Zombieland, there’s something about Stone’s performance that’s appropriately consistent throughout them all. She delivers a brand new character each and every time, but beneath the surface there’s a hint of that actress we’ve come to know and love.

What can you expect from Sony Pictures Animation’s Hotel Transylvania? Candy eyeballs, gummy worm-topped cakes and fogging drinks, of course! Okay, you probably shouldn’t have your hopes up for all of that, but come September 28th, Hotel Transylvania should offer up all the fun you’d hope for in a comedy packed with animated versions of your favorite mythical monsters.

However, it’s not September 28th just yet, so in an effort to get us in the Hotel Transylvania spirit, just like in the movie, the folks behind the film planned a 118th birthday party for Mavis, Dracula’s daughter and the character voiced by Selena Gomez. There were party hats, appropriately themed treats, the opportunity to take a photo with Dracula’s hotel in the backdrop and more. As much fun as the party portion of the event was, it was easy to leave behind as a sneak peek of the film awaited us in the theater. 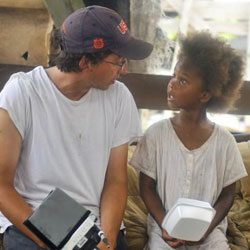 When you get the opportunity to make your first feature film, you better take advantage of it, just like Benh Zeitlin. Turns out, putting everything he had into the short film “Glory at Sea” was well worth it because the piece made its way into the hands of the right people, the kind of people who were ready to facilitate Zeitlin’s next project, Beasts of the Southern Wild.

The film centers on Hushpuppy (Quvenzhané Wallis), a six-year-old girl living with her father, Wink (Dwight Henry), in a bayou community known as the Bathtub. When a storm ravages the area, there’s a mandatory evacuation, but, despite a serious illness, Wink refuses to abandon their home, insisting he and Hushpuppy stay to rebuild with a few other dedicated community members.

Not only is it quite the undertaking to make the move from short films to a feature, but Zeitlin and co. took on a number of additional challenges for the sake of quality including hiring a five-year-old actress to lead the film and recruiting a devoted bakery owner to portray Wink, despite the fact that the film was far from his top priority.

In honor of Beasts of the Southern Wild’s June 27th release, Zeitlin sat down to run through the entire process from adapting Lucy Alibar’s play to finding his Wink and Hushpuppy, bringing in family and friends during production time and more. Check it all out in the video interview below.