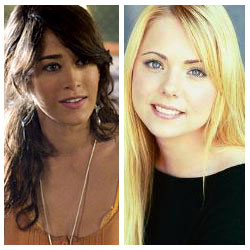 Hot Tub Time Machine may be a film about four guys going back in time via hot tub, but no buddy comedy is complete without some female counterparts to humanize the raucous insanity. In this case those ladies are April and Kelly, and they’re played by Lizzy Caplan and Collette Wolfe.

Way back when, Adam (John Cusack) was really into a girl who didn’t share his feelings. Lucky for him, April, a music reporter following the band Poison, is there to pick up the pieces. Kelly’s situation isn’t as sweet. She has a rather unconventional relationship with Lou (Rob Corddry). In the midst of heaps of hatred and insults, the two actually share a connection.

Wolfe is certainly part of the comedy far more than Caplan, but both actresses have their times to shine and manage to reveal Adam and Lou’s sensitive sides. Check out what Wolfe had to say about her sexy time with Corddry and Caplan about her passion to see more female-driven comedies.